What really happened this year in the LGBTQ Jewish marching group:

This past Sunday, over 80 people courageously marched in the LGBTQ cluster of the New York Celebrate Israel Parade. JQY believes it is an incredible act of bravery for LGBTQ youth to proudly and openly march through an audience of over 40,000 predominantly religious Jews. Marchers included teens who were kicked out of their homes, schools, and synagogues just for being who they are. These are teens who often struggle with self-harm, suicidal ideation, and internalized shame. Yet almost miraculously, they muster up the courage to face the communities that rejected them. Their message to the Jewish community is very simple: “We all belong.” As far as JQY is concerned, these youth are heroes.

However, in their moment of courage and pride, this most vulnerable cohort of the Celebrate Israel Parade was targeted for sabotage, bullying, and harassment by an organization called Jewish Voice for Peace (JVP). Seven JVP “disrupters” secretly infiltrated the LGBTQ marching cluster. They pretended to be part of our group, marching side by side with our teens. As our contingent approached 72nd Street, one of the JVP disrupters lunged toward our speaker system, pulling out as many wires as she could until our music went silent. At that moment, five other disrupters removed their shirts to reveal red shirts brandished with the words “DEADLY EXCHANGE” in black. In the absence of our music, they began yelling to cause a disturbance. They proceeded to block our marching banners with their own anti-Israel signs. The disrupters had formed a human chain, aimed at preventing our group from moving forward. Efforts to move forward were met with physical resistance, intimidation, and screaming. Finally, police and security swarmed into our group creating more disarray and fear. People were pushed, trampled, and shoved. Our marchers were terrified and shocked. In this confusion, some in our cluster thought it was a terror attempt and immediately fled the parade route. Ultimately, five JVP members were arrested. Despite this sabotage attempt, our group managed to turn the music back on and completed the march with our heads held high.

1. This was an act of violence: Just as freedom of speech does not allow one to falsely shout “fire!” in a crowded room, we believe this action was reckless, dangerous, and irresponsible. The parade route is tense and lined with armed security as it is a target for terrorism. Vigilance resulting from the violence in London led to an atmosphere of extra apprehension. The teens in our group were even more on edge, given a predominantly religious crowd that is not LGBTQ competent. Two years ago, a 16-year-old girl named Shira Banky was killed by a religious fanatic while marching in the Jerusalem LGBTQ parade. In this context, the JVP hijack of the group caused chaos and alarm that could have easily resulted in someone getting shot or killed. In addition to this trauma, our equipment was vandalized, t-shirts were stolen, and our members were pushed, shoved and trampled.

2. This was an act of censorship: JVP’s action was not an act of free speech but rather an attempt to block, silence, and sabotage the expression of others.

3. This was an act of cowardice: Choosing the most vulnerable group in the parade to disrupt is nothing more than bullying. Even in extreme cases that justify non-violent disruption, basic activist values inform us never to target oppressed or at-risk populations. Going after LGBTQ people as they face the religious communities that so often are the source of their oppression, is needlessly cruel.

4. This was an act of antisemitism: Jews have been celebrating Israel for thousands of years before 1948 and the formation of the modern state of Israel. For many, the concept of Israel is central to religion, culture, and peoplehood. While protesting Israel or the parade is not necessarily an antisemitic act, we believe that preventing Jews from simply celebrating Israel is a basic threat to religious freedom. It would be akin to attacking Muslims from valuing Mecca simply because there are legitimate human rights issues with the Saudi Arabian Government. One can be proud of one’s heritage and nationality while resisting against offensive policies and leadership. Certainly, there are many patriotic Americans who celebrate the US on July 4th but wholeheartedly reject the current administration. We would consider it Islamophobic to judge all Muslims who celebrate Islam, by the actions of those who commit violence in its name; it is similarly antisemitic to incriminate all Jews who celebrate Israel with the actions of the Modern Israeli government. Jews deserve the same sensitivity, consideration, and respect.

5. This was an act of homophobia: According to Rebecca Vilkomerson, JVP’s executive director, “the LGBTQ contingent was a carefully chosen target”. Seth Morrison, a JVP board member told JQY, “We take pride in targeting the entire LGBTQ contingent”. The LGBTQ cluster was not targeted because of any organizational action, position or statement made; we were targeted because we had the audacity to march as an LGBTQ community. Had we not openly identified as LGBTQ this would likely not have happened. We were singled out for sabotage because of our sexual orientations and gender identities. There is a word for this kind of prejudice. Frankly, the idea that a non-LGBTQ protest organization is explicitly targeting and sabotaging LGBTQ people is unacceptable and terrifying. If a right wing organization admitted to doing the same we would call them a “Hate Group”. JVP must be held to the same scrutiny.

At JQY we believe that caring is not a zero sum game. We are infinitely dedicated to the safety, well-being, dignity, self-determination, celebration, and liberation of all peoples. We reject the black and white thinking that requires us to pick a label or side. There can be love and support on both sides of a conflict. Compassion must be non-binary. These are the values that guide our mission to provide the support, crisis work, and advocacy that LGBTQ youth deserve. 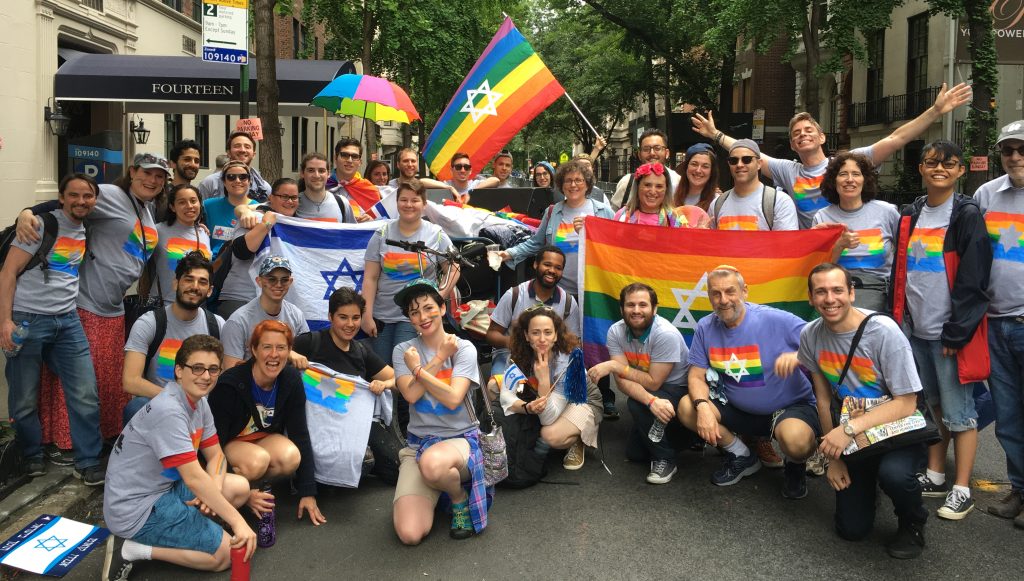 JQY and the Celebrate Israel Parade:

JQY is a New York organization devoted to the health and well-being of at-risk LGBTQ Jewish youth. JQY runs a weekly Drop-in Center for LGBTQ teens from predominantly Orthodox and rejecting families. As our focus is the emotional and physical welfare of all LGBTQ young people in the Jewish community, we believe it is important that no one feels excluded from care because of their political, ideological, or denominational stance. Our membership reflects the full spectrum of Jewish feelings about Israel, and we support our youth on all sides of this important debate.

While we do not take political positions on issues such as Israel and foreign policy, we are committed to the full inclusion of LGBTQ Jews in every aspect of Jewish and LGBTQ life. In 2012 JQY teens challenged and overturned the homophobic policy excluding LGBTQ organizations from participating in the New York Celebrate Israel Parade. We are proud that JQY is the organization responsible for ensuring LGBTQ inclusion in one of the country’s largest Jewish communal events. Being part of this parade also allows JQY to reach a population that may otherwise not be aware of our resources. Every year, JQY receives a surplus of new online requests to join JQY from Orthodox teens after marching.

We also respect that there are JQY teens with strong feelings against Israel.  Some even choose to peacefully protest the parade. JQY stands with them too. Support is never contingent on point of view. Our JQY guiding Jewish principle is Eilu v’ Eilu divrei elokim chaim – both these and those ideas, even when in conflict, are simultaneously the living word of G-d.